Think of the stories you’ve encountered in your life. Most of them conform to a few simple rules. There is a hero of some kind. The hero has objectives of some kind: blow up the Death Star, throw the One Ring in the Crack of Doom, rescue Catherine Martin from the Jame Gumb’s basement, or redeem your beloved Princess Buttercup from Prince Humperdink. In by far the vast majority of these stories, the hero simply achieves his objectives, overcoming obstacles and perhaps suffering some along the way but nonetheless winning in the end. People like it when the hero wins in the end, Make a good-enough story about that and you’ll have a large audience.

In many stories, the hero may win in the end, but other characters are likely to suffer and perhaps die prematurely. In the vast majority of the stories you have encountered in your life, these secondary characters fall into three categories.

In slightly more sophisticated stories, the hero might not succeed in reaching his (putative) goals, but who will be redeemed in some other way. Perhaps the hero’s suffering or failure will be redeemed by “meaning” as described in (3), or his initial goal not be achieved but the hero will “learn something important” or achieve other more important goals of which he was not aware at the start of the story. Rick Blaine might not walk off with Ilsa Lund at the end of Casablanca, but he has recovered his idealism and might be at the start of a beautiful friendship.

At the outer limit of permissible narrative darkness there might be some genuine tragedies, but even here the audience will often interpret them as tales of how the hero’s fate was the result of his “hubris.” The notion that Hubris brings Nemesis, though a lot bleaker than the notion that you’ll get a medal at a neato ceremony for your role in blowing up the Death Star, still suggests a sort of moral order in the universe that people find comforting. (Best not to think about the fact that Stalin died in his bed at 73.)

There might be exceptions to these rules, a few examples of stories without traditional structures of actions or moral meanings, but they are generally pretty few and out on the fringes of their respective genres — the darkest of tragedies (or black comedies), the weirdest of weird fiction, the most experimental of experimental literature. Small in absolute numbers of works, and smaller still in overall cultural influence. Compare the audience for Star Wars to that of Thomas Ligotti’s “The Town Manager” if you don’t believe me. (If that’s not a fair comparison, then Star Wars to any story relevantly like “The Town Manager.” Or to all stories relevantly like “The Town Manager” added together.) Or just try to see how many stories you know that don’t apply any of the rules — stories that have no hero, or that have a hero without goals, have a hero that fails to achieve his goals, or that have sympathetic characters — or the hero himself — who suffer or die and whose failures or sufferings or death are not redeemed by any “meaning” or “higher purpose.” True, if you’re very well read you’ll be able to think of some. But not many.

We pay a lot of attention to stories because they are better than reality. Reality is arbitrary. It doesn’t care about our goals and doesn’t help us to meet them. If there were a Clarice Starling in reality, she would have been much more likely than not to have been killed by Jame Gumb in his pitch-black basement and had her skin harvested for his collection than she was to have killed him. (It’s his home ground, after all, and he’s the experienced killer with the night-vision gear.) Luke Skywalker can do better than Porkins in blowing up the Death Star only by the intervention of the supernatural in the form of the “Force.” In reality as opposed to the imaginative world of stories, perfectly decent people suffer and die all the time, and no one learns a damn thing from what happens to them or is particularly moved by their suffering to make the world a better place.

Small wonder people focus so hard on stories, and that when they do so they insert themselves sympathetically into the stories in the roles of heroes. How many people imagine themselves as Luke Skywalkers as opposed to Porkinses? If the world of Star Wars were possible world and you were somehow in it, you’d be pretty unusual even to be a Porkins and billions of times more likely to have been one of faceless dead on Alderaan. How many people imagine themselves as Rick Blaines? Again, if the world of Casablanca were a possible world you somehow plunked down in, you’d be privileged even to be an Ugarte (remember him? he was the guy played by Peter Lorre), perhaps even one of the nameless if numerous usual suspects. 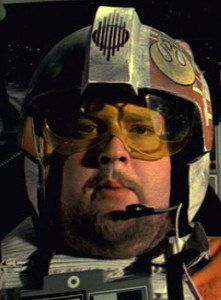 Unlike most of the inhabitants of the Star Wars universe, Porkins at least got a name and a face.

Fiction agrees with us better than reality. So we pay attention to it rather than reality. But because we pay more attention to it, it becomes a disproportionate source of our information about the world. So we come to think that reality is in some important sense better than it is. Fiction is a balm for life, but it biases our understanding of the world toward optimism.

6 thoughts on “Plato was right; the poets are liars”