Reflect:  we are told that knowledge is good and thatwe are made better off by being better informed.  These maxims are so deeply embedded in our culture as to seem self-evident.  To question them is to invite ridicule.  And…

I am sure all of you readers have heard about Malala Yousufzai, a 14-year old girl from the Swat Valley in Pakistan.  She was a activist on behalf of girls’ education in a part of the world infested with hateful religious obscuratinists militantly opposed to that sort of thing.  She was recently shot in the head by a member of the Taliban for what she was, and that’s something deeply sickening (though not, I submit, terribly surprising to those of us with much historical consciousness about the ways religion deals with dissenters).

As of the writing of this post, Malala has not died of her wounds and has been flown to a specialized facility in the United Kingdom for treatment.  The doctors caring for her have some guarded optimism about the possibility of her making a recover.  From an Associated Press story:

Despite the early optimism, the full extent of Malala’s brain injuries has not been made public and outside experts cautioned it is extremely unlikely that a full recovery of all her brain’s functions can be made. Instead, they could only hope that the bullet took a “lucky path” – going through a more “silent,” or less active – part of the brain.

“You don’t have a bullet go through your brain and have a full recovery,” said Dr. Jonathan Fellus, chief scientific officer at the New Jersey-based International Brain Research Foundation.

Among things the story goes on to discuss are various advantages Malala has, due to her young age, at making a recovery. In one of them, a rather interesting admission slips out:

There’s also a psychological aspect to why youngsters have a better shot at recovery. While injured adults often mourn the loss of what they had, teens don’t know what they are missing.

So apparently knowledge of what we might be but cannot be and what it is really like to have capacities we lack are source of suffering. So there is a kind of knowledge — and not a trivial kind of knowledge, either — that seems to be bad for us. There is something important and intimate we might be better off being less informed about.

Small wonder that aging, which is largely the loss of capacities the experience of having which we can access through memory is such a miserable process.

And how grim that this ugly fact about (one kind of) knowledge should poke through the story of a heroine who has suffered precisely for the sake of allowing knowledge to spread. 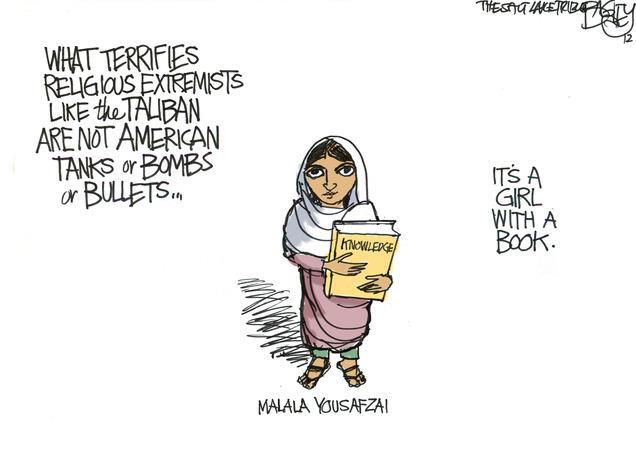 One thought on “Ignorance is bliss”