We are all prone to the overconsumption of Bad Things, things which are likely to significantly reduce are health and produce “premature” death.  Tobacco, alcohol, most illicit and many licit drugs, tasty calorie-laden foods, even leisure (in the form of a lifestyle without enough physical exercise) all have this property. 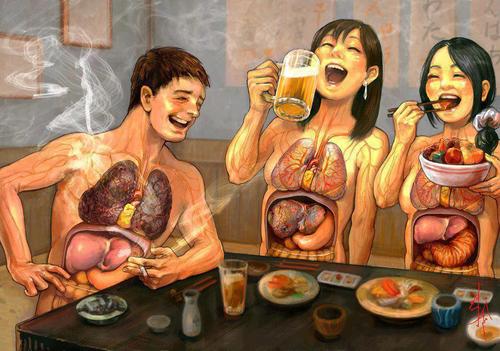 Why do we do this?  There is a standard medico-therapeutico-educational answer that our culture spits back at us which runs something like this:  people consume Bad Things because they suffer from defects of rationality.  Either they are just ill-informed about what vices do to themselves, or they are victims of their own rationalizations (“I’m really not that heavy a user,” “I can quit any time I want,” “I’ll start exercising next year,”)  or they just have some sort of defect of self-control in the absecnce of which they would have healthier, longer-life-promoting habits.  People who offer this culture’s standard line about things like cigarettes and heroine might acknowledge that their users get a short-term hedonic boost from indulgence in their respective Bad Things, but emphasize that Bad Things come with a serious bug:  they shorten one’s life.  The answer to the problem of vices is thus some program of education or therapy which will enable the consumer of Bad Things to overcome vis consumption habits.

But there’s an assumption that underlies this answer, which is that the consumer of Bad Things actually somehow wants to have, or somehow has an interest in having, a longer life.  This premise is nearly universally held, but as readers of this blog must by now know, it’s now one I hold.   I happen to think that life is suffering, on balance, and as a corrolary to that thesis that there are many people who are quite miserable in their lives and who therefore want, or in some plausible sense have an interest in finding, an exit from life.  So in addition to the fact that Bad Things provide palliation from the misery of life (and I do not, in this post, wish to deemphasize the importance of palliation at all), they also tend to shorten life, and for people who are miserable, this shortening of life, the lethality of Bad Things, is not a bug but a feature of the Bad Things.

But if people really want their lives to be shorter, why do they end them slowly (and, more often than not, very painfully) through the indulgence of vices rather than through just committing suicide outright?  Good question:  the best answer I can think of is that it is part of human psychology (except perhaps for some people with extraordinary intellects) to be very afraid of imminent nonexistence.  To prepare to commit suicide means confronting this terrible fear, and this is something that most people will not do, unless their lives go terribly badly.

Consumption of Bad Things, though, allows the consumer to (mostly) avoid this fear.  Our ability to rationalize, to self-deceive, means that we can “know” in some way that what we are doing is killing us without having to squarely confront the fact that we are doing this.

But I suspect that the consumer of Bad Things still does know “at some level” that ve is killing verself with vis vice, and this knowledge is a driver of the consumer’s behavior.  Is the concept of such knowledge coherent?  I am defending a thesis here somewhat akin to Georges Rey’s thesis of meta-atheism*. Professor Rey’s thesis is that while many profess to believe in God, most people (except perhaps for the least sophisticated among them) know “at some level” there isn’t any God. There’s not consciously aware of this, indeed might become quite indignant if you tell it to them, but nonetheless atheism is available to them “at some level” and this knowledge is on occasion betrayed by their behavior and reactions to real-world situations. Here is one of Rey’s illustrative examples:

Consider the reactions in two situations of a young, loving, “believing” couple who are ach seriously ill: In the first, the wife has to be sent off to a luxurious convalescent hospital for care, for two years before the husband can come and join her for an indefinite time thereafter. In the second, the wife is about to die, and the husband has been told he will follow in two years. If, in the second case, there really were genuine belief in a heavenly Hereafter that (let us suppose) they both avow, why shouldn’t the husband feel as glad as in the first case — indeed, even gladder, given the prospect of eternal bliss! However, I’ll bet he’d grieve and mourn “the loss” much like anyone else.

Yes, I’ll bet that too. And I’ll bet further that it’s because the husband in this example really does know something that his professed religion and even his inner consciousness disavows.

In the case of Bad Things and people’s knowledge of them, there should be behavioral reactions that would betray knowledge users of Bad Things have of their ultimate lethality as well as the fact that this lethality in part motivates consumption. One might find, for example, that therapy or education consistently fails to get a certain group of users to stop using, even though it might achieve other behavioral effects consistent with increasing awareness of a lethality’s vice in its practitioners, for example, it might fail to get alcoholics to stop drinking or heroin uses to stop shooting up, but at the same time get them to try harder to get people those users want to see alive and healthy (their own children, perhaps) to not take up their vice, or stop it if they have taken it up.

I might predict further that if there are people for whom lethality of a vice if a feature rather than a bug, that changes in external circumstances that make the vice harder to pursue will promote substitution of dangerous vices rather than cessation thereof. There are probably lots of natural experiments to be found here: a county might go dry by legislation, for example. Some alcoholics might reform, but I suspect others might take up other dangerous vices. Or a person whose supplier was arrested by the drug cops might take up a whole new dangerous drug (one to which ve was not previously addicted).

There’s some very interesting social science to be done here.

And if it does show that there are people for whom the bad aspects of Bad Things are a feature rather than a bug, then that’s compelling evidence in favor of my thesis that on balance, life is suffering.

3 thoughts on “Vices as slow suicide”